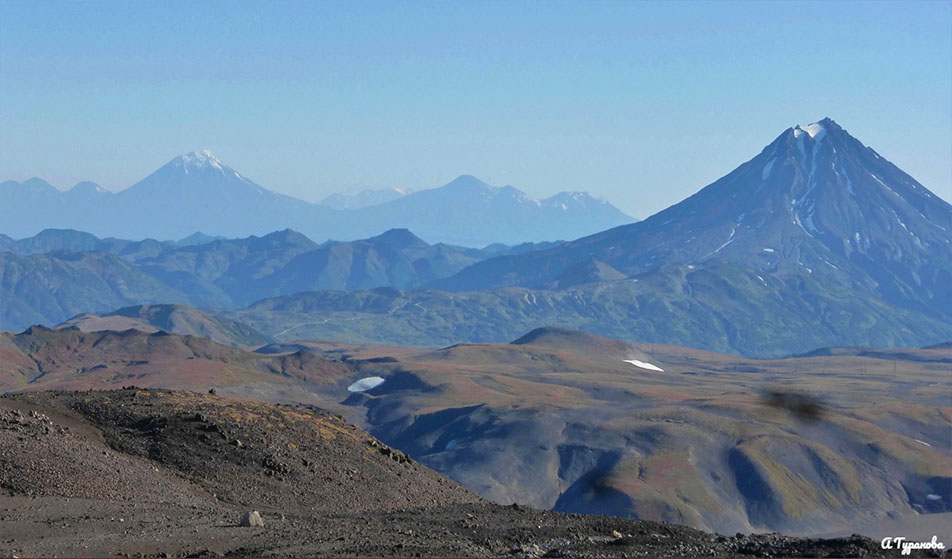 After the World was created it seems that Mother Nature felt another creative urge. It is a pity that no one will ever suspect the fantasies required of her. And then she created Kamchatka. It's not our job to judge how real legend is. But all serious scientists and researches during the last couple of centuries who have worked on Kamchatka research agree about one thing: this peninsula is a unique ecological museum under the open sky created as a gift to humanity.

Traditionally under this name is Kamchatka Peninsula and the closest part of the continent are united , including Karaginski Island and Komandorski Archipelago. The place of their location is the far north-east of the Eurasian continent. Kamchatka stretches for a handshake with North America, Japan and all countries of the Pacific region. It is the first in Russia to meet the morning of the new day and tells its foreign neighbors, "HI, let's be friends!" We shouldn't confuse Kamchatka with Siberia; it is a very independent maritime country. In the west the peninsula is bordered with by the Okhotsk Sea, which has a very questionable reputation as the world's refrigerator. In the east it is bordered by the not much more "gentle" Pacific Ocean and Bering Sea. But the territory of Kamchatka is large: 1200 km in length, 450 km in width in the peninsula part. Altogether Kamchatka could easily include three European countries: France, Belgium, and Luxembourg.

The mountain ridges - Sredinny, Valaginsky, Ganalsky, and Kumroch - stretch from the north to the south giving the peninsula the shape of a giant fish. Volcanoes and volcanic peaks, cyclones, and underground heat created on the territory of the peninsula a mixture of twenty climate zones which are separated from each other sometimes only by a few hours of driving or even walking. Maybe in some way Kamchatka decided to comfort people living in this territory for their isolation from the rest of the continent by creating a microcosm of different climatic conditions as well as the flora and fauna of Asian Russia. In any case tourists who decide to travel through Kamchatka should prepare themselves for a variety of weather surprises and bring an unusual selection of clothing. For example, at the end of June in the North of the peninsula you will walk on snow. In the east in a single day you can experience midsummer heat and autumn rain. At the same time, in the central parts of the peninsula you will be charmed by summer warmth, blossoming bird cherry trees and high meadows and grass. In Petropavlovsk-Kamchatski during a walk on the Avachinskaya Bay you will be freshened by sea breeze. Lovers of mountain skiing will find exotic runs here and will acquire a beautiful suntan. So please pack in you suitcase everything from a swimsuit to a warm jacket for all seasons and their pleasures. In describing winter travel in Kamchatka one of the popular topics is blizzards. We need to admit that those blizzards are really for lovers for all sensations, people who would like to test themselves as penguins-for snow and wind. Well Kamchatka gives you sun no less generously than snowstorms. It compares with the average amount of sun hours in most popular resorts.

You should come to Kamchatka not only because you like to travel. Here you can also find health, understanding of the world and the Universe, and peace of mind. This is according to the researcher Dr. Faina Lodis who spent her life research about the influence of Kamchatka on people. Many people agree with her words, especially those who were broken by life's hardships and overcame then by seeing the beauty and eternity of Kamchatka, bringing back with them not only memories, but also good health and a will to fight. Nature took over 50 million years to do this lab work: to raise islands from the sea floor, to create landscapes and contrast. It built not simply a mountainous, but also a volcanic country to tell the history of the birth and evolution of the planet. There are about 160 dormant and 29 active volcanoes. This peninsula owes its unique characteristics to these volcanoes. Billions of years ago when life was in the process of creation, the atmosphere looked like smog from the volcanic smoke holes through which the earth "breathed", today's seas looked like acidic crater lakes. Fire and ice, the action of boiling hot springs and waterfalls, blossoming meadows in the middle of snow and ensembles of stone sculptures created by volcanic eruptions. Only after seeing all of this can we understand what colors and what brilliant beauty the Earth hid from us after it became old and civilized. But don't we, its inhabitants, have the same fate? Kamchatka attracts with the beauty of youth. And its strength is filled with the energy of the Cosmos and the Earth. Our planet is a small dust speck in the Milky Way. It obeys its rules and laws. Each living and dead star , sunstorms and stillness, motion of planets and constellations requires reactions from Earth. When it receives an impulse from the Cosmos, it immediately returns it, engraved on its heart and life┘through volcanoes. That is why astrologers, people who long for meditation, come to Kamchatka; here is one of the main points on the planet where its energy and the energy of the Universe come together. Guests of Kamchatka who want to become acquainted with its exotic locales have difficult choices to make. On mountainous ridges there are about 414 glaciers, each unique in its relief. Their thickness sometimes reaches 150m (of course if you try to visit all of them - 817.1 sq. km.) Among them there are 200 healing mineral springs. 150 of them are hot springs which simultaneously give out heat energy equivalent to the burning of 30 million units of fuel. According to biologists it is these hot springs which preserve a unique fir forest on the coast of Kronozky Inlet. When the Ice Age killed all of her life, the hot springs managed to warm up a small area (about 16 sq. Km.) and preserved this plant which is gone forever from our epoch. The Wisdom of the Creator is also seen in the care taken to ensure that the museum of the planet - Kamchatka will be preserved ecologically clean. There is no large industry here. The average population density: one person for every 1.6 sq. km. But animals, birds, and plants live as in the newly-created world. This opens exceptional possibilities for lovers of nature, photography and fishing. A third of the area of Kamchatka is covered with forest, and the rest is lake and rivers, low and alpine meadows. The cleanliness of the air and the energy coming from the plant world are such that, according to evolution of specialists, one day spent in Kamchatka forest will raise the productivity of a person at work by two to three percent. Experienced guides and biologists will introduce you to the trees and plants (the height of some plants reaches three meters). This is not only a useful but a captivating tour, because the peninsula has 1168 types flowering and fern plants. Many of them have medicinal value and 100 types are already used in scientific medicine. Birdwatchers can photograph 240 types of different birds, many of which are written up in the "Red Book" of endangered species. They will be charmed by the amazing and noisy world of sea animal colonies, bird rookeries, and giant Kamchatka Bears. If you can imagine it, the male bears reach a weight of 600 kg and a length of 2.5m. If you add the fact that there are 7.5 thousand bears wandering around the peninsula, it is really hard for a curious person to not see them. Patient photographers will also catch fox, luxurious sable, lynx, beaver, and moose. Come, you will meet 37 different kinds of large and small animals used to live in natural environment. For a sport fisherman Kamchatka will become a holiday for the soul. It is the largest cradle of salmon in the world. About ten types of salmon are born and spawn here including the king of the salmon - King Salmon weighting 45 kg and more in Kamchatka. The area of a Kamchatka spawning reaches 50 000 hectares; the actual productivity of fish reproduction is 10 tons from each hectare.

The selection of fish in coastal waters of the peninsula is incredibly rich: cod, halibut, flounder, famous herring, perch, and rock trout. There are 43 species, including the seven most popular fish here! Add to this eight types of crabs, six type of shrimps, mollusks, sea cucumbers, and commercial sea weed. And then make a choice for your self in terms of fishing or underwater hunting. And if you will try everything you can believe in yourself as an ichthyologist. Come to Kamchatka and you will learn to love the world. And for those who are still not sure, we might add: in our century, so overwhelmed with social cataclysms, Kamchatka, because of its geographical location, and richness of nature, was practically never involved in war and never experienced hunger. Having Yelizovo International Airport and Petropavlovsk-Kamchatski seaport it is not difficult to travel here.